Growing old sucks.  Though I’m only in my forties, I have noticed my body telling me that its warranty expired about fifteen years ago.  As if that wasn’t a sufficient reminder of the inevitable cost of time, I see an even more powerful one, that of watching my dog slow down.  When I got my girl, Carly, back in November 2013, she came to me with a well-earned nickname, ‘Crazy Carly’.  She was a high energy, high drive dog with a propensity for destructive behavior.  Yet now, that damaging nature is relegated to her Wubba toy as well as any small, furry rodent that might foolishly draw too near her in between her nap times.  Carly’s pace has slowed due to a bum elbow, and she is continually more content to stop and sniff the bushes and trees than drag me at a high pace in the direction of her choosing.  A dominant female Rottweiler who always had to lead the pack, she is now happy to just be in the pack.  Carly is slowing down it seems.

Of course this isn’t the first time I’ve seen this.  Having had many dogs in my years, all rescues, almost all were with me drastically shorter periods than if I had gotten them as puppies.  Still, it is no easier to watch now than it was then.   The appearance of gray hairs, the longer sleeps throughout the day, especially after walks. No matter what the species, we all start to slow down as we age.
The slow, steady deceleration seems more tolerable, though, than the sudden decline that often coincides with illness.  I watched a good friend experience that recently with her Rottweiler, Duke.  She’d had him for almost nine years, having gotten him as a puppy.  I had the pleasure of first meeting Duke just a few days after she got him, and I continued to watch him grow into a large, handsome dog who became Emily’s faithful companion.  Through social media I, along with many others, followed Duke and Emily’s adventures. Among the duo’s favorites were long road trips, told through pictures of Duke at various landmarks along the way.  Then, last month, Emily received the worst news a person can hear about a loved one.  Cancer.  I had dreaded this day.  Not only because Duke was such an amazing dog, but because I knew how important he was to my friend Emily --how much time they had spent together, how he had protected her and comforted her during hard times.  To know that he was going to leave her was hard to watch. 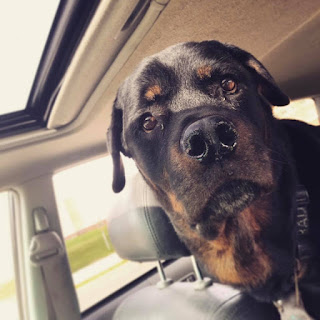 Though social media can be a pain at times, one benefit is that it allows a connection to friends that you might not normally have.  Emily shared Duke’s final weeks via Facebook, including some road trips and his enjoyment of various foods that were sent to him by family and friends.  His final weeks were truly ones where the focus was his comfort. Still, I could see in the photos and in Emily’s words that Duke was slowing down. Fast. 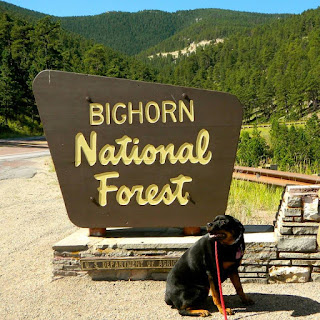 In those final days, Emily posted pictures of a stunning sketch she was creating of Duke.  Emily’s artistic skills are exceptional, and this work was a fine tribute to her boy.  What was amazing to me was that she was often working on it through tear-filled eyes while Duke rested nearby. Perhaps that is why it was so beautiful and captured his essence as well as it did.  The drawing was not just a project, it was love transferred to paper, a successful attempt to capture Duke before the slowing down ground to a halt. 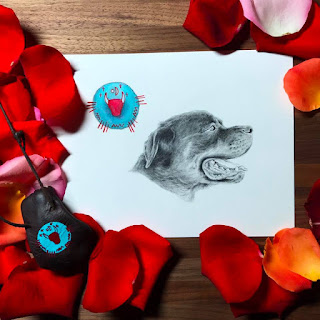 When she posted about his passing on May 10, 2017, I hurt for her as I do for all those who have loved and lost a dog.  I know that pain well.  It is the curse of owning dogs.  They somehow work their way into our hearts and their passing leaves a hole that little else can fill.  Perhaps that is why I become a little sad watching Carly slow down, knowing what is coming.  I don’t know when, but the outcome will be the same.

If there is a lesson in this reality it is this: Slowing down isn’t really a bad thing, as it allows us to see the world, our lives, and those in it in a more appreciative manner.  Like Carly, and all my dogs before her, slowing down and just taking in her surroundings becomes a lot more important than being in a hurry to lead the pack. Perhaps that is why God created us this way.  The slowing down that is part of growing old offers the opportunity to appreciate what we have before it is too late.  When Carly has passed on, hopefully in a few more years, I will apply the same lesson to any rescue Rottweiler I take in, knowing that no matter how young they are when I get them, eventually they will slow down. 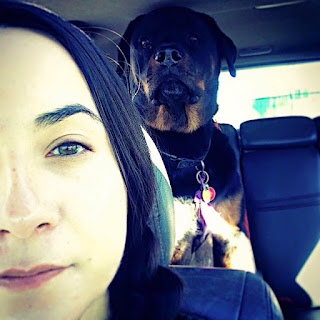 Dedicated to my friend Emily and her dog Duke
Duke: End of Watch 10-MAY-17.

Duke and Emily are a wonderful example of the beautiful bond that forms between humans and dogs. I try to capture that bond in my novels as I feel it is a unique part of our humanity.  For more information about my books, please go to www.troykechely.com.
Posted by Troy Kechely at 5:45 PM No comments: