What the hell do I have to be afraid of? I have Bo!

After founding Big Sky Rottweiler Rescue in March 1997, I began working closely with the Humane Society of Gallatin Valley in Bozeman, Montana.  Any Rottweiler that came into the shelter was my responsibility to evaluate, train, and find a home for, and it was no different when I came across a dog named Bo. 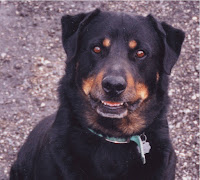 Part of my duties at the shelter were to do home checks for any Rottweilers that people wanted to adopt.  On one such occasion, while out in Three Forks, Montana, I was told by the applicant that I should check out a Rottweiler just down the alley from them.  They said that all the neighbor kids threw rocks at the dog every day after school and he really wasn’t cared for by the owners.  Finishing my home check, I drove down the alley and found an eight foot square pen made of sheep fence with a couple pieces of plywood rigged up in a failed attempt at a shelter.  Inside the pen was a dark dog with the markings of a Rottweiler.  I say dark dog because his coat was not the typical black but rather it was gray with dirt and grime.  Stepping out of my car, I started walking toward the dog causing him to slip into protection mode, his barks alerting the owner who was working on something in the yard. She walked over to me as I neared the pen. I introduced myself, saying I was with Big Sky Rottweiler Rescue and just loved Rottweilers and stopped to see hers.  She explained how Bo was her son’s dog but he could no longer keep him.  While we talked, the dog pushed his head through one of the deformed squares of wire. I could tell he was craving for any kind of human affection, but I didn’t dare approach as his eyes told me he was very protective of his space. The lady even warned me, telling how one of their relatives had reached in to pet Bo, only to be rewarded with a trip to the emergency room.  Bo’s eyes are what struck me most and when I see a picture of him today I experience the same feeling each time.  His eyes were intense and powerfully intelligent. Not the intelligence that you see with some dogs, a higher level, such that I swear the dog was thinking more than most humans I interacted with.  Deep in that powerful stare, behind the anger and rage of being kept in a small pen, there was a glimmer of desire.  The desire to be loved, to be a dog in a home instead of in an isolated cage.

Inside the kennel lay an empty water dish, its bottom and sides covered in green algae. I mentioned the dog needed some water and the lady shrugged her shoulders as if not caring but, perhaps motivated by my glare, grabbed a hose and filled the dish, not bothering to clean it out.

At this point in my life I was well trained in various martial arts and the use of weapons. This is important because at that moment, it took every bit of restraint I had to not unleash each skill I had on the insensitive excuse for a human that was filling the filthy dish with water.  I kept telling myself that my goal was to save the dog and nothing else.  I had decided that very thing the first time I had looked in Bo’s eyes.  Even if he was aggressive and needed to be put down, I couldn’t leave him there to rot his existence away. Better to end life with someone who cared than to waste away unloved. With that in mind, I continued the conversation and learned that they didn’t want the dog and were thinking of selling him.  It took about twenty minutes of polite conversation before I convinced them to surrender the dog to the local shelter the next day. I say polite because that is one skill I learned in rescue.  Focus on the dog and saving it, regardless of what you want to say to the people.  Be professional, be polite, save the dog. With her promise on the deal, I left. While driving back to Bozeman I called the shelter and let them know that Bo would be coming in the next day. I also let them know we would need to handle him with care.  Thankfully the staff were top notch so I wasn’t too concerned.  Yet as I drove, the rage of seeing Bo in those terrible conditions still boiled inside me.  It took a long time for that rage to go away but sadly, in rescue that rage easily returns when you see the terrible things people do to dogs on a daily basis. The only counter to that is when a dog is saved. When a dog everyone had given up on is turned around and becomes an amazing member of a family and society.  This roller coaster ride of rescue is best summed up in one sentence which I share with anyone wanting to get involved with rescue.  The negatives outnumber the positives, but the positives outweigh the negatives.  The good things may be less frequent than all the bad things but when the good things happen they remind you why you do what you can to save a dog.  One of the best quotes I’ve seen that captures this is: “Saving a single dog won’t change the world but it will change the world for that one dog.”

Flash forward six months.  After Bo came into the shelter, under the expert care of the staff and myself, he became the shelter mascot.  Because he had a strong distrust of people and kids he was difficult to place but that was okay with the staff, who all grew to love and trust the Rottweiler who helped them with their chores every morning.  I will tell more about Bo and his long stay in future blogs, but there is one story that shows how strong an impact a dog can have on a person.

Jamie was a kennel tech at the shelter.  A young lady in her late teens or early twenties, she was perhaps a hundred pounds, if wearing heavy clothing and soaked with water.  She was a thin, gentle gal, who loved all animals, especially Bo.  Now, the shelter back then was located next to the East Gallatin River, with a labyrinth of trails local fisherman used to access the stream. Others that used the trail were homeless people who had taken to setting up camp in the thick underbrush. This homeless population became an issue when some of them began harassing others and even attempting assaults.  The police were concerned enough to give a warning to all the shelter staff and volunteers.

During this time, the shelter had just a couple fenced yards to put the dogs into during cleaning time and a limited number of volunteers to walk the dogs. Dogs like Bo were classified as gold star dogs because of their behavior issues, so only qualified staff and volunteers could walk them.  To offset the lack of exercise time for dogs like Bo, the staff would walk them early in the morning and then let them hang out inside while they cleaned the facility. Sometimes additional walks were provided by qualified volunteers like myself during the day. Finally, before the shelter would close, the staff would walk them again.

On one of those walks, when it was still dark out, Jamie had taken Bo out on the trails by the river.  This was after one of the warnings by the police about the homeless people causing problems.  Jamie told me the next day that she was terrified as she walked and spent the entire time looking every direction, thinking she was going to be attacked around every corner.  Then an epiphany hit her.  Everyone knew that Bo was protective of his territory as well as those he cared for, so much so that when the staff were being threatened by an irate customer it was decided to keep Bo behind the front desk until the situation was resolved.  With this knowledge, Jamie stopped, Bo stopped and looked up at her.  Looking at the Rottweiler at her feet she said out loud.
“What the hell do I have to be afraid of? I have Bo!”

With new confidence, Jamie proceeded on her walk as if there wasn’t anything in the world that could harm her.  You know what?  She was right.  Anyone that knew Bo, anyone who spent time with that amazing dog, knew that he would give his life for ones he loved.  What really was amazing about him was not only that devotion but also his restraint when he had to be aggressive, but that is another story.

Bo ended up being at the shelter for almost a year before a home was found.  If I hadn’t already owned two dogs, Bo would have been mine.  He not only gave Jamie and the staff confidence when walking him, he also was the reason I met someone who would end up being one of my best friends.  All this because we shared a love of Rottweilers, particularly a steely eyed one named Bo.

For more information about Big Sky Rottweiler Rescue, go to www.bigskyrottrescue.org and don’t forget to check out my novel, Stranger’s Dance, on Amazon. Bo was one of several dogs that helped inspired the character of Stranger.
Posted by Troy Kechely at 7:59 AM