Great Vets and The Next Generation

On November 18, 2015, my dogs and I had the honor of giving a presentation to the Montana State University Pre-Vet Club. When I was asked to do this I wasn’t hesitant, but I will admit I was a little concerned as to how to keep the students young, over-worked, and stressed minds attentive. Teaching has always been natural for me, and I’ve presented to groups both large and small around the nation, so that wasn’t the issue.  Instead, it was recognizing that I had an opportunity to pass along over 20 years’ experience on dog handling and behavior assessment. In a way I would be passing the torch to these future veterinarians.

In all my years of working with dogs, I’ve learned that there are good veterinarians and great veterinarians.  The good ones know their stuff and can care for the animal well enough; however, you can just tell that they really don’t connect with the dog.  The great veterinarians are the ones that do connect, often better than they do with the human owners.

While giving my presentation, I was pleased to see that one of the professors was a longtime friend, Dr. Mattix, who was the one who had spayed my first two Rottweilers, Taz and Mickey. I remember that day well.  I had already brought the dogs in for some shots or other medical work and I had seen the other veterinarian of the practice. She was a ‘great’ vet but I didn’t know it at the time.  When my dogs were over six months old I decided to get them spayed, having no desire to deal with more puppies or fend off the neighborhood hounds when my girls were in heat.  I scheduled the appointment without a care which vet did the work.  While waiting in the exam room, Dr. Mattix entered, wearing her standard white doctor’s coat and files in hand.  I had never met her and she paused at the door looking at the files, then looking at my six month old Rottweilers who were sitting near me, and then back to the files before looking at me.

“Do these dogs need muzzles?”, she inquired with a confused look on her face.

“Well, there is a warning on their file.”  Dr. Mattix set the file down and leaned over with a big smile. “We don’t need no muzzles do we puppies?” Her voice was playful and friendly and it elicited a fur ball of loving Rottweiler bounding across the room to say hi to the welcoming lady.

I never did learn why the other vet had put a warning in my dogs’ file.  They were puppies and had never shown any sign of aggression.  In hindsight, I now realize that the other vet had a bias against Rottweilers and she likely wasn’t a dog person.  The practice was, after all, aimed at exotic and small pets, and I switched not long after I learned that they had let Dr. Mattix go.

Dr. Mattix is just one of many great veterinarians I’ve worked with and I’m honored to call her a friend.  She is one of those who doesn’t hold a bias against a breed and even if the dog is aggressive, they don’t take it personally.  My current veterinarian is one of those great ones as well, having served in the U.S. Army and having cared for the Military Working Dogs in Iraq. His calm, cool demeanor has helped him in many situations. Being in rescue, I tend to adopt the dogs that no one else wants or can handle.  It comforts me that when I do have such a dog, taking them to the vet will not be a major ordeal for any involved.

Picking a good veterinarian can be hard though.  Over the years I have learned to not only trust my gut but also trust my dogs.  Perhaps that was the biggest leap for me, trusting my dogs.  If they are properly trained and socialized and yet give a warning sign about a person or situation, I now know that I had better pay attention.  That trust has helped me find great veterinarians and has also reinforce the beautiful bond that has existed between humans and dogs for over 30,000 years.

Oh, and regarding that presentation I did for the pre-vet club, well, I picked the one topic that I knew a couple dozen college students would relate too. Stress.  Specifically, the effects of stress on both human and canine behavior and how to reduce or eliminate those effects.  When I began teaching I wasn’t sure how well the topic would be received, but the attentive stares and thoughtful questions told me I was doing something right.  The only downside was Bradum.  Yes, my 122 pound love bug of a Rottweiler was a bit of a distraction and I had four girls ask if they could take him home with them.  After explaining the consequences of any such attempt they relinquished his leash back to me. Funny though, no one made such an offer for Carly. She is my current problem dog and was nervous in the large group.  This was a good thing though because I started the class, right after I entered the room and even before introducing myself, by asking which dog was most likely to bite.  One student was astute enough to observe that Carly was showing nervous warning signs. 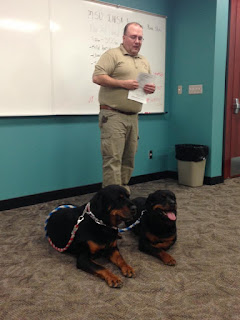 Having that hands on observation and explaining the impacts of stress on dogs was critical for those students to becoming great veterinarians.  By understanding how stress limits the dog’s ability to recall imprinted behaviors, those learned through training and socialization, the students saw the importance of not only controlling their stress and fear but also changing the environment so that the dog’s stress was reduced.  If that wasn’t possible I then covered the basics of eliminating the fight and flight options of the dog so that the only option for the animal was to submit. The goal is to do this without being harsh or cruel.  If these students walked out of the presentation with that knowledge then I feel I did my job of passing my knowledge onto the next generation.

The confirmation of this success was the enthusiastic call for me to return next semester to teach about approaching and handling nervous or aggressive dogs.  Though I don’t get paid for this I feel it is a worthwhile effort.  The goal being that of equipping the next generation of veterinarians with knowledge and experience so that they aren’t just good but great.
Posted by Troy Kechely at 8:33 PM