This last weekend I had to travel to Billings on business but was fortunate to spend time with my friends, Steve and Rose, who recently had to put down their Rottweiler, Tasha.  During our talks, Rose shared about Tasha’s quick decline and final day but also about how fortunate they were to have had her eleven years.  Tasha was two years old when they adopted her from the shelter in Bozeman after they approached BSRR about getting another dog when their first rescue had passed away. As with anyone who has lost a four legged family member, the hole left in their hearts was evident with moist eyes and broken voices as Tasha’s final day was relived. Rose then told about that evening how she couldn’t look at Tasha’s bed and removed it from their bedroom, wash it and then stored it in the basement. I knew exactly how she felt.
Though it is never easy to put a dog down, it seems especially difficult to move on after doing so with a dog that you had shared your life with for many years.  When my boy Griz finally passed in 2012, he had been with me thirteen years. That first morning when I walked out of my room I did what I had done thousands of times.  I looked at Griz’s bed and started to say “Good morning Grizzy bear.”
I barely got the first word out when I froze and stood staring at the empty bed.  I knew not to look elsewhere as the night before, my veterinarian had helped me load his body into my car for me to drive Griz to the pet crematorium that evening. All I was left with was the empty bed.
For the days and weeks afterwards, I gave as much devotion as I could to my remaining rescue, Grace, but knew I needed to open my home to another dog soon.  Even after doing so, Griz’s empty bed haunted me and it was while walking Grace and my then new dog, Bradum, that I came up with the idea for a poem.

I didn’t want to do something that was specific to Griz but rather to all the dogs I had walked through life with but were now no longer there.  It grew beyond that to where I now send it to anyone who loses their dog and is struggling.  To let them know that their pain is normal and that they are not alone.  So I share it with you now and encourage you to share it as well.  I do this because if there is one thing I’ve learned as a dog owner, it’s that the love we have for our pets is only equaled by the grief we experience when they part from us. 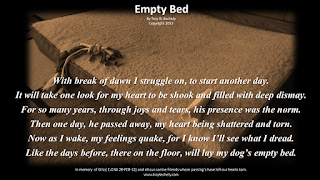 If you want to know more about my efforts as a writer, be sure to follow my Facebook and Twitter accounts.  You can also learn more about me at my website, www.troykechely.com, as well as purchase my first novel, Stranger’s Dance.
Posted by Troy Kechely at 6:59 AM

Email ThisBlogThis!Share to TwitterShare to FacebookShare to Pinterest
Labels: death of a dog, dog, grieving, Rottweiler