One in a Million

“Of all the animals I get to work on, Rottweilers are the hardest.  They just don’t let you know when they’re hurting and when they do it’s too late.”  Dr. Spencer Anderson spoke with a downcast face as he walked into the exam room on Monday morning, August 1, 2016. He knew the moment he saw my old Rottweiler, Bradum, that things were not good.  We had been trying for a month to figure out why he had digestive issues.  All the usual treatments and exams had failed to produce any definitive results. Then, in just twelve hours, my boy declined in energy and awareness.  At the end of two hours at the veterinary hospital, a diagnosis of Lymphoma was determined to be the most likely culprit.  Bradum was shutting down.  Spencer, a dear friend, has always been upfront with me in providing options, as he knows I’ve been down this road many times, the last three with him there assisting my pets in passing. I knew that anything we did would be a long shot, and I wasn’t going to put my boy through that, preferring, as always, to let my dogs go out with some dignity.  They are Rottweilers after all.
I got Bradum in March 2012 from Big Sky Rottweiler because his family was moving and unable to take him with them.  I wish I could take credit for his wonderful obedience and social skills but I can’t.  He came to me about as perfect as a dog can be. I might have polished a few things and switched his commands to German, but really, he was about as good a dog as I could have hoped for. 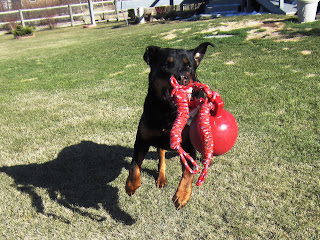 At six-years-old and 120 pounds, he was a burst of energy and vitality that had been absent in my life for quite some time.  My last senior dog, Griz, had passed a month prior, after thirteen wonderful years with me.  My remaining dog, Grace, was nearly blind and partially crippled from an injury that occurred long before I adopted her.  Bradum, though, was the rough and tumble goofball that I hadn’t enjoyed in many years.  Games of tug were his favorite pastime, and his growls and exuberance only added to the fun.  Any visiting guest was greeted by Bradum with a big tug rope in his mouth, the invitation very clear.  Few turned him down. 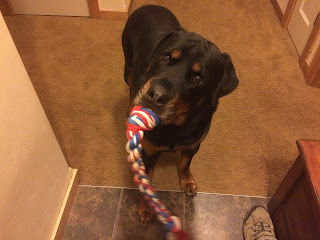 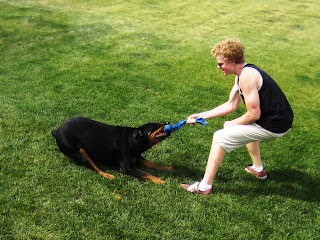 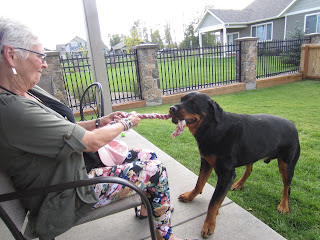 I don’t know if Bradum had come from special breeding, I just know he was a special dog.  Yes, I know all dogs are special, but on occasion one stands out among the rest.  Everyone who met Bradum, even fellow Rottweiler owners, commented on how amazing Bradum was.

“One in a million,” a friend said, describing Bradum after their first meeting.  Yes, I tend to agree.  Though I never did any advanced training with Bradum, I’m confident he could have been a great therapy dog.  I know this because I used Bradum to teach kids how to approach dogs safely for the Bozeman Police Department at many of their events.  I also used him as my demo dog when teaching classes to law enforcement and animal control officers.  Each time Bradum was the inevitable hit of the show.  His massive size and intimidating head and markings were all quickly ignored by anyone who met him as his butt wiggled excitedly to say hi.


For four years, five months and six days, Bradum was my closest friend.  Even after his pushy and rather annoying little sister, Carly, arrived, Bradum still managed to be the center of my pack.  He was the calm, confident one who helped balance the chaos of my world and Carly’s intensity.  If it wasn’t for Bradum’s tolerant yet dominant persona, it would have been difficult to get Carly to the point she is at now.  Having such a steady rock in the pack makes working with a challenging member so much easier.  For that I will be forever grateful to Bradum.

As I saw Bradum’s muzzle grow grey over the last year, I knew my time with him was limited.  Having owned Rottweilers since 1994, I know that anything over eight years of age is a blessing.  The dreaded cancer is so prevalent amongst the breed. At age eleven, I had hoped for perhaps one or two more years with Bradum but that was not to be.  The decline happened so quickly, as is often the case with dogs, that there wasn’t much I could do about it other than prepare as best I could. Even as Spencer was running the final blood work, I was looking up information for pet cremation services in the valley.  I have been down this road too many times and I knew the decision I was going to have to make. Spencer didn’t try to talk me out of it; he knew it was the right decision as well.  As he left to prepare a shot to try and make Bradum more comfortable until he came to my house that evening to assist with the farewell, many of the staff members poked their heads into the room, asking if I needed anything before I left.  Some just coming into the room to pet Bradum and say goodbye. When I was ready to go they let me walk Bradum out through the back to avoid the waiting room.  Several of the staff struggled to hold back tears, as did I. 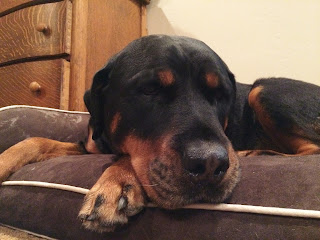 Once home, Bradum collapsed in the laundry room, exhausted from the morning and the short walk from the car.  Carly took up a guard position outside the laundry room door.  She knew something was wrong. After a while, Bradum had the energy to get up for a drink then to walk a few feet into the dining room, where he slept some more.  This was the pattern throughout the day.  Walk a little way, rest.  Friends and family stopped by.  When my stepdad came, Bradum wagged his tail for the first time the entire day.  He really loved his Grandpa Phil.  More people stopped by.  Bradum had the energy to greet visitors, but he often needed to sit or lay down after just a minute or so.  Between visitors I cried, usually when Bradum had retired to a section of tile where he couldn’t see me.  Carly was confused, going from being on the couch next to me to a place on the floor from which she could see both Bradum and I.
As the time drew near, Carly became more hyper-vigilant, her protection instinct coming out in full force as my mom arrived, followed by my friend Mike. Her normal friendly greeting at the door was replaced with deep barks and growls until I allowed each person in.  She did the same when Spencer arrived, though by then I had her on a leash.

Bradum had retired to the tile in the laundry room at this point.  That was where he would end things.  I had no interest in trying to coax him out to the living room where the guests were.  I wanted him to go on his terms.  Like a true Rottweiler, Bradum clung to life as hard as he had his tug rope.  It took a double dose of sedative before he finally slept long enough for the fatal drugs to be administered.  I was lying next to him, whispering in his ear, telling him to go get his tug.  His face twitched as I spoke.  God, I hope he was playing tug in his dreams at that moment.
Heavy breaths.
Twitches.
Deep sigh.
Goodbye.
After letting Carly sniff her brother and then allowing my mom some time with Bradum, my closest friends, Mike and Brett, helped me place Bradum on a litter left by Spencer, who had departed after confirming that Bradum was gone.  Spencer prefers to leave people to grieve as long as needed.  With the care and respect due a Rottweiler, my friends placed the large tug that I had near Bradum on the litter with him. They then carried him to Brett’s truck, and he and I drove Bradum to the crematorium.  Bradum’s largest and newest tug went with him as was only fitting.  I hope he is playing with some of the other dogs with that tug.  I know I will miss those games as much as anything else.

Email ThisBlogThis!Share to TwitterShare to FacebookShare to Pinterest
Labels: Amazing Dog, once in a lifetime, Rottweiler