A couple of weeks ago I was having lunch with a good friend of mine who just happens to be my veterinarian.  While chatting, we discussed the topic of people and dogs, specifically people who don’t like dogs and people who do.  The group that doesn’t like dogs requires no explanation as they are who they are, and we accept them even though we might not agree with their views.


Where it becomes a bit more complicated is within the group that likes dogs.  After we each shared experiences about people we knew who ‘liked’ dogs, my friend and I came to the conclusion that there are actually two types of people in that category.  The first, we agreed, were people who are fond of dogs but with conditions.  Those conditions include: the dog is well behaved, doesn’t make a mess, doesn’t cause trouble, isn’t aggressive, doesn’t shed (much), and loves everyone and everything.  Basically, they like a dog as long as it isn’t an inconvenience.  My friend and I each have dealt with our fair share of these types of people, often not in positive ways.  During my time volunteering at the Humane Society of Gallatin Valley, I saw numerous dogs dumped because they were an inconvenience.  Almost always it wasn’t the dog’s fault but was simply a lack of willingness – on the part of the owner - to work with the dog and its issues. Needless to say, my friend and I have limited tolerance for people like that.


The other type of person that likes dogs are those we called ‘Dog People’.  We identified these as the types who, once they take in a dog, it is forever.  Period, no exceptions.  The dog chews up something, and the Dog Person realizes that the dog was just bored and redirecting energy. The Dog Person realizes they need to exercise the dog more and stimulate it mentally as well as not leave things lying around.  The dog acts aggressively towards other people or animals, and the Dog Person invests time into training and socializing the dog, even if it takes years.  If the dog becomes old and can’t do things like it used to, the Dog Person changes their lifestyle to accommodate the dog.  Basically, the Dog Person takes in a dog with the full expectation, and even pleasure, of completely incorporating the dog into their lives.


There are many examples of these types of people and the fact that you are reading this points to the likelihood that you, yourself, are a Dog Person.  One such example is some dear friends of mine who have been helping with Rottweiler Rescue for over a dozen years.  As husband and wife they never had kids, but, instead, have devoted themselves to caring for rescues they have adopted.  The price of that was that for over five years they never took a vacation, because they weren’t willing to put their dogs in a kennel.  I know that feeling as I’m the same way.  The reason for this is that, like my friends, the dogs I have taken in spent too much of their time isolated in kennels either in rescue or at shelters.  To put them in one again is just not something I’m willing to do if another option exists.  For my friends, they found someone who would house sit for them, allowing them to finally take a much needed vacation. For me, I am fortunate that my parents live nearby and are willing to watch the dogs for me.  Yes, in an emergency, I would put my dogs in a boarding kennel but, being a Dog Person, I will always try and find the solution that least traumatizes my dogs.


Now, this conversation between my friend and I eventually circled back to the problem dogs we have owned and the destruction they have caused.  Most recently for him, this problem dog is his rescued Belgian Malinois. She damaged the interior of his brand new truck when fireworks went off nearby.  For me, it is my girl Carly, who destroyed the front seat of my Subaru while I was gone inside the local hardware store for all of seven minutes.  She wasn’t scared, as had been the case with my friend’s dog. No, Carly was pissed because she couldn’t get to a bird-shaped kite that was whipping around in the wind near my car.  Carly, like many working line dogs, is highly intense with high predatory drives, and if she can’t release her energy on the target of her choosing she will release it on whatever is handy.  In that instance, it was the front seat of my car. 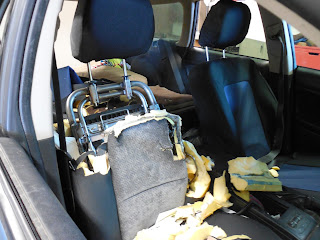 I share this because my friend and I both reacted similarly when we discovered the damage.  We didn’t get mad, we just realized what had happened and accepted it for what it was.  We then made changes to our lives (and vehicles) to try and prevent such things from occurring again.  You see, that is what Dog People do: we work with the dog, and, over time, not only does the dog become better behaved but so do we.


So I ask this of you, what kind of person are you?  Are you a person who likes dogs but only if it isn’t an inconvenience, or are you a Dog Person? If you are the former then do me a favor, don’t get a dog.  Go spend time at the local animal shelter, walking dogs, in order to get your dog fix, but don’t bring a dog into your life unless it is for the entire life of the dog regardless of the inconvenience they might cause.  I ask this because, from my own experience, dogs will most certainly be an inconvenience at some point in their lives.  But you know what? I love them for that and that is why I’m a Dog Person.
If dogs are a big part of your life then you will enjoy my first novel, Stranger's Dance.  Check it out at my website www.troykechely.com or on Amazon.  Thanks.
Posted by Troy Kechely at 1:59 PM